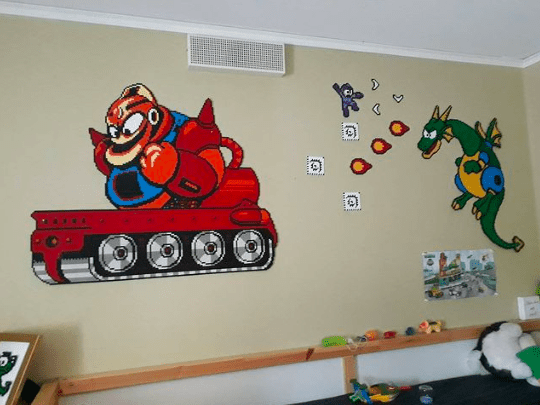 What inspires your artwork?

Tricky question, a lot of things inspire me. Other artists is a big inspiration to me, I’ve got a few favourites in this scene. I also get inspired by retrogames which is built on pixels, easy to make projects from a screenshot, many times it’s games I remember from my childhood. But I also bead characters from movies and musicians. After some times with beads you start to see things in beads and pixels. Walking past a mushroom in the woods: That could become a nice project in beads! I believe I’ve been bitten by the beadbug, Crazy illness!

What’s the biggest piece you’ve ever made?

My biggest piece… Depends on how you define biggest. By size I think it’s Guts-tank from Megaman 2, a NES-game. I did most parts myself but my son also helped with that project. It was on 25 boards. But I also beaded SMB3 World 1 Map in minibeads which was 20 boards but a lot more beads than Guts-tank. 🙂

Do you have a dream project you’d love to make, but just can’t justify yet?

Back to Artist Interviews

Get the latest news, offers and discounts